Refer A Friend
Fancy a tenner?

Do you have a horse which has struggled with soundness despite much investigation and much professional help? Perhaps looking at the entire horse and its functional movement patterns is the answer. Here an owner who has started on the journey of the ARR Functional Movement Training taught by Klaus and Gabrielle Schoeneich from Germany shares her experience with a horse which seemed like it was a hopeless lost cause.

FIND OUT MORE ABOUT TRAINING FOR SOUND FUNCTIONAL HORSE MOVEMENT 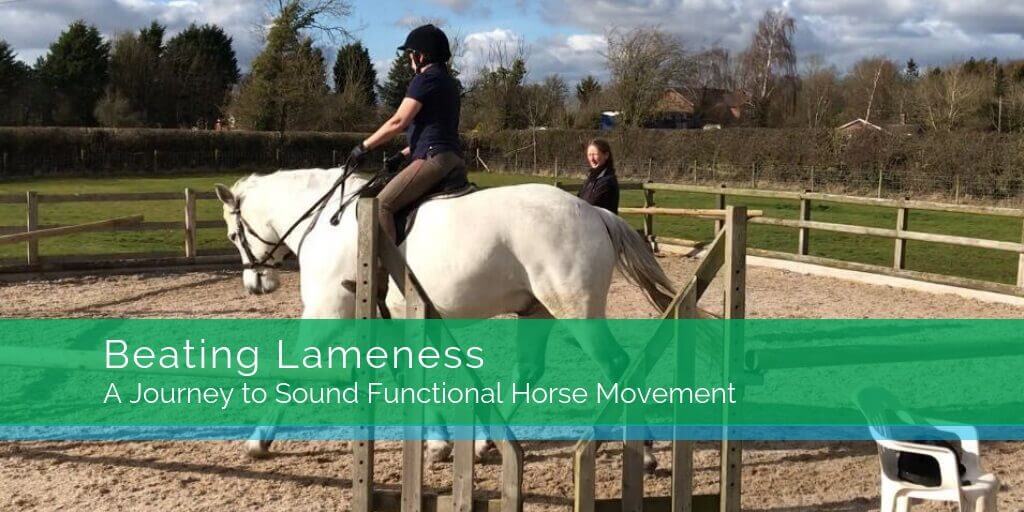 My story will hopefully inspire those who have a horse with complex needs and are struggling to find answers despite the support from your vet and many others with opinions and expertise. I am an amateur owner who rides for fun and has ambitions to compete at low level dressage.. nothing more.. so not too much to ask.

I bought Paddy as a 5 year old pure bred Connemara in 2015. Everyone said buy a Connie they are robust and hardy…

All went well for the first few months until we had the need for a vet call to deal with a skin lesion and itchy reaction. Steroids settled this but could also have been the nemesis for the next problem, which was an eventual diagnosis of Equine Metabolic Syndrome.

A behaviour change of rearing in a schooling lesson, at the same time, completely out of character led to the catalyst of musculo-skeletal problems being diagnosed initially as hock changes, followed by suspensory ligament surgery and sacro-iliac problems. At the same time grade 2 gastric ulcers were diagnosed. Months followed of treatment, rehab and dietary management. The problem of all this was trying to balance reducing calorie intake to control insulin levels but feeding little and often to prevent the onset of ulcers again.

Having dealt with the ulcers, EMS and musculo skeletal problems the vet advised me to get back in the saddle. With professional help we resumed schooling and riding but I still clearly had an unhappy horse reluctant to go forward.

In the endless search for answers I came across a link on UKNHCP that led to me finding Forageplus who were conveniently on my doorstep. I approached Forageplus for nutrition advice and through this company, Sarah the owner, introduced me to the work of Klaus Schoeneich and his functional movement training for horses. I was inspired by Sarah’s story of buying a horse who had failed a vetting but through Klaus’ schooling techniques had nurtured a horse back to fitness and ridden work.

I attended Klaus’ clinic as a spectator at the UK clinic in May 2017 and came to realise that I had to do something fundamentally different. On talking to Klaus, explaining my horse’s complexity he advised me not to ride Paddy until he had found his centre of gravity on a circle and his crookedness was corrected.

This seemed to require a whole new way of thinking and it was a daunting time. The traditionalists of the horse world were not interested and many offered little encouragement, even those horsey friends closest to me who had known of my challenge. At the same time none had any answers to truly fix Paddy.

In June 2017 I commenced straightness training with Paddy with the help and support of a person who believes totally in Klaus’ approach. We started with round pen work (a makeshift construction of my jump posts and poles in a turn out area at home). We made consistent and steady progress.

Paddy and I returned to Klaus’ clinic in September 2017 where he was worked in the round pen. Klaus recommended sending Paddy to Germany where he could benefit from the team and their expertise at ARR. However, due to recent diagnoses of multiple allergies, resulting in being unable to be stabled and risk of aggravating ulcers due to the stress of travel we had no choice but to continue working in the round pen at home.

In November 2017 I took Paddy to a clinic with Klaus’ saddler so my saddles could be checked. I didn’t want to jeopardise the progress we had made by a saddle that would block the movement we had worked so hard to create. Klaus is very particular about saddles and the way they should free the trapezius area and allow the back to swing upwards. My GP saddle needed some adjustment so was sent to Germany. It was returned very quickly and I found it reassuring knowing it was suitable for Paddy in the early stages of ridden work (until we could know it would be worthwhile investing in an ARR saddle designed with a flexible tree and a shape and design which allows freedom of the shoulders, trapezius muscles and that all important up swinging back).

So we slowly plodded on over the winter. With gradual changes in Paddy’s movement and carriage that allowed us to progress to ridden work at the end of January 2018.

The first time Paddy was ridden in 9 months he had self-carriage and a way of moving not seen in him before. I have been blown away by how Paddy has changed.

And so …… our journey really now begins. Learning to take the straightness training and correct functional movement into ridden work and a whole new way of schooling.

I now have a sound horse with hope for the future wherever it takes us and my advice for anyone who wants it is:

Don’t listen to those who are not open to a fundamental change in how you school your horse.

Be patient, take the time it takes not the time you want it to take. Training for sound functional horse movement may mean not riding for an indeterminate period of time.

If you would like to see Liz and Paddy and watch their progress they will be attending the next Klaus Schoeneich clinic in Mold, UK at the beginning of May, along with the horse which inspired Liz to give the ARR training a go.

There are spectator places and two horse places left on the May clinic. If you want to be blown away and find a whole new way of training for the best functional movement your horse can have for soundness, balance, longevity and most of all happiness then we look forward to sharing the knowledge with you.

FIND OUT MORE ABOUT TRAINING FOR SOUND FUNCTIONAL HORSE MOVEMENT

Lots of new followers finding Forageplus even ones

Little Fari update and a GIVE AWAY ⠀ 💚 He is

🎅 Delivery in time for Christmas? Check out our order deadlines & office hours 🎄
Dismiss