MAKING A DIFFERENCE
EVERY HORSE MATTERS

Laminitis is a devastating condition that can wreak havoc with any horse. However, laminitis doesn’t always appear as the classic, rocked-back laminitic stance and bounding digital pulses. Low-grade laminitis can smolder away with symptoms that are often not recognized by the owner. A horse with low-grade laminitis is not only in pain and has compromised performance, it can be tipped over into frank laminitis at any time. 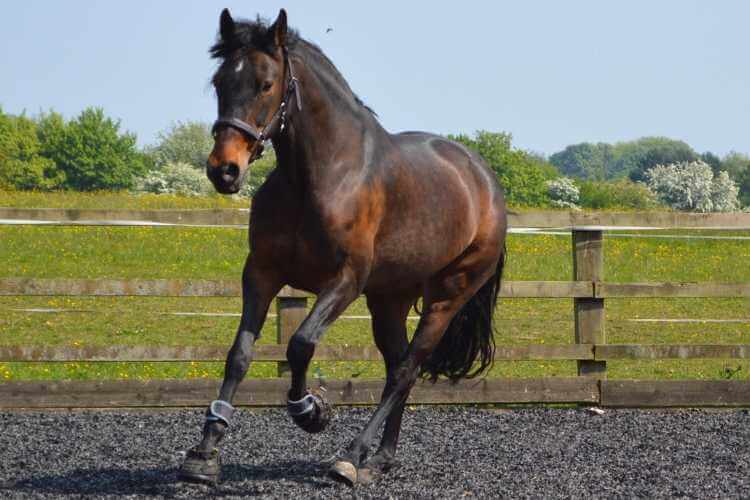 Summary of this article on endocrinopathic horse laminitis

Short check-list of the causes of laminitis:

Insulin Resistance, sometimes also known as Equine Metabolic Syndrome, is common. Foot pain due to low-grade laminitis can be a very real, but not very obvious, cause of behavior and training problems in horses.

I will be talking about Insulin Resistance (IR) in this essay; Cushing’s (Pars Pituitary Intermedia Dysfunction=PPID) is another subject, although the two conditions can share clinical signs. Both conditions can cause laminitis.

Before I go any further, I will direct you to the Proceedings from the Second NO Laminitis! Conference, which was held in Oregon. These Proceedings are free to download, and contain a wealth of information. Of particular interest are Dr. Kellon’s articles about IR and PPID and Dr. Bowker’s articles about hoof function and pathologies. To download the Proceedings go to http://ecirhorse.org/index.php/conference-proceedings-recordings

This is a condition where the cells of the body are no longer adequately sensitive to insulin. Insulin is necessary to allow cells to absorb glucose, and is crucial in regulating carbohydrate and fat metabolism in the body. Because the cells are resistant to insulin, glucose is not transported into the cells at a normal rate
(glucose is necessary for cellular energy). The cells are basically starved for glucose, and the body pumps out more and more insulin in an attempt to get adequate glucose into the cells.

Horses don’t end up with elevated blood glucose as a rule (although it does happen sometimes); instead, they seem to have an inexhaustible pancreas that keeps pumping out more insulin. Elevated insulin in and of itself will cause laminitis. The mechanism for this is still not well understood.

If the horse is overweight, it is a double whammy because fat is an endocrine organ and will pump out adipose-derived hormones, some of which are pro-inflammatory, and some of which will have adverse effects on the immune system. Please note, however, that not all fat horses are IR; and not all IR horses are fat. Saddlebreds in particular (anecdotally) often present as “skinny IR.” 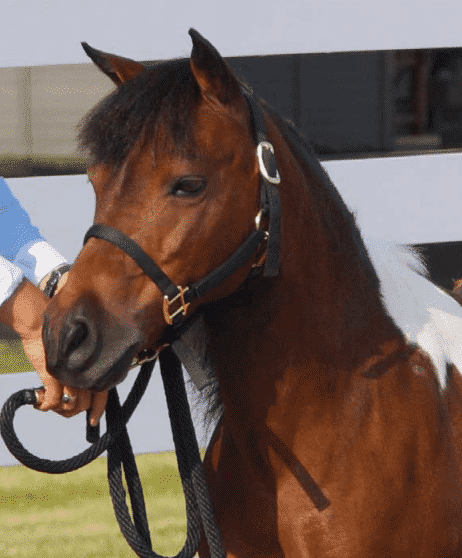 Cupcake, an 18 year old pony with cushings and EMS

Some signs of an insulin resistant horse

There is a genetic propensity for insulin resistance. IR is found most often in the “easy-keeper” breeds: Spanish horses, Arabs, mustangs, ponies, minis, donkeys, Morgans and many others. Those “easy-keeper” genes are beneficial in wild horses and horses/ponies on sparse native pastures, but can lead to disaster in the often sedentary and over-fed lifestyle of the modern domestic horse or pony.

Breeds that are NOT prone to insulin resistance are: Thoroughbreds, Standardbreds, most Quarter Horses, and many Warmbloods. In fact, when one finds elevated insulin in a Standardbred or Thoroughbred, it is usually driven by Cushing’s syndrome or disease, such as Lyme disease.

“Non-fasting” means the horse has low-starch/sugar hay available to it for a minimum of four hours previous to the blood draw. Grain meals or other starchy meals can cause a false positive (insulin higher than normal). A fasting sample can cause a false negative.

Some laboratories and veterinarians still recommend a fasting glucose/insulin test. This is a hold-over from human, canine and feline blood sampling to check insulin and glucose levels. Horses are trickle feeders, not meal feeders, and so fasting samples are not appropriate.

The blood needs to be spun and separated as soon as possible, and kept chilled (frozen is fine as well, but only one freeze/thaw cycle is allowed or the results will be affected).

The Virginia Polytechnic Institute published a landmark study in 2006, using 160 ponies on pasture, to determine blood markers that can distinguish between laminitis-risk ponies and normal ponies. Because these ponies were on pasture 24/7, using a non-fasting blood test more closely mimics the study parameters.

“Normal” insulin and “normal” glucose values don’t always mean the horse is not IR or EMS.Click To Tweet

Here’s the kicker: “normal” insulin and “normal” glucose values don’t always mean the horse is not IR. The definition of “normal” for insulin in horses is still a somewhat hotly contested item. Various researchers have come up with formulas to help predict if a horse or pony could be at risk for laminitis. These proxies are very useful for those borderline cases, and especially where the horse/pony is having issues, but the bloodwork is within normal limits. Other vets and researchers argue (correctly) that borderline cases can be picked up using glucose tolerance tests or glucose/insulin injection tests. However, not only are these tests expensive, they risk precipitating laminitis. In my opinion, there is no reason to use these tests.

Any horse suffering from laminitis should also be tested for Lyme disease (in endemic areas) and Cushing’s disease if over 8 years of age. The test for Cushing’s disease is a single, non-fasting blood pull to test for ACTH levels. The Dexamethasone Suppression Test used to be the gold standard for diagnosing Cushing’s disease; however, there is a small risk of causing laminitis with this test. A non-fasting single blood pull for ACTH level is preferable. The blood is pulled into an EDTA tube ( purple top), spun and separated as soon as possible, and frozen. Send with overnight delivery to Cornell University, frozen and packed on ice. There is more information on blood pulls and diagnosis here: http://ecirhorse.org/

Any horse suffering from laminitis should be tested for Lyme disease (in endemic areas) and Cushing’s disease if over 8 years of age.Click To Tweet

Please note that trailering a horse to the vet clinic for blood pulls is not a good idea, because the physical exertion of trailering, plus the stress, can cause elevations in ACTH, insulin and glucose.

Treatment for horses with laminitis

The mantra for any horse with laminitis is:

Diet for a horse prone to laminitis

The basic diet for IR horses is to feed hay or haylage that is below 10% combined ESC (Ethanol Soluble Sugar) plus Starch. Starch should be less than 3% of the total.

Test the hay, and feed the minerals and vitamins that the hay is deficient in.

ALL hay will be deficient in Vitamin E and the omega-3 fatty acids, because these are fragile compounds that are destroyed during curing. So feed 2,000 IU of Vitamin E in gel caps containing oil or use powdered Vitamin E, which is in contact with a small amount of oil for absorption. For omega-3 feed 60 to 120 grams = 1/2 to 1 cup ground flaxseed per 1,000 lb = 454 kg horse. These additions replace the Vitamin E and the omega-3 fatty acids found in grass.

In addition, most hay is deficient in iodine, unless you get your hay from a sea-coast area; and all hay is likely to be deficient in salt, copper and zinc. Your supplement should therefore consist of Vitamin E, flax, salt, and minerals balanced to the hay: copper, zinc, and iodine (2/3 mg iodine is suggested per 1,000 lb/454 kg horse), plus or minus calcium, magnesium, phosphorus and manganese, depending on your hay analysis.

Most hay also has too much iron in it. There isn’t much one can do about this, except ensure that you are giving adequate copper and zinc, since iron will interfere with the absorption of these minerals.

If you can’t test the hay, then best to soak it: one hour in cold water, or 30 minutes in hot water, and then drain the yummy sweet water where the horses can’t get at it (I have used it to water my garden if I have to soak in the summer, but others have said that the hay soak water kills their plants). Soaking hay is possible even in sub-zero temperatures, but it is definitely a chore. If you can buy tested hay, it is much easier.

Testing your hay for a laminitis prone horse

Sadly, one can’t guesstimate the sugar/starch in the hay by looking at it. Some hideous-looking brown hays can have high sugar; some luscious-looking green hays can have low sugar. You can only know by testing. If you can’t test to ensure the ESC and starch are low enough, then you have to soak. What is NOT in the diet is even more important than what is in the diet. The laminitic, IR horse should not have access to pasture, nor carrots, apples, grains, or starchy feeds. Most bagged feeds are totally unsuitable for IR horses, even though there may be a blatant statement on the bag: “Safe for Laminitic Horses!” Learn to read ingredients and feed analyses, and never trust the marketing hype and labeling.

Correct trim and hoof care for a laminitis prone horse

The trim is often the last piece of the puzzle to fall into place. Poor hoof form can contribute to foot pain, and to delayed healing from a laminitic episode. The trim, with or without shoes, is short toe and low heel, physiologically balanced to the form of the coffin bone within the foot. X-rays can be invaluable in helping
to determine the correct trim. Long toes, under-run heels, or high heels are unfortunately all too commonly seen, and these contribute to foot pain and retard healing of the hoof.

Laminitic horses should have their feet trimmed every 4 weeks, or even every 2 weeks in some cases. Having shoes on the horse makes this difficult if not impossible, so using boots for comfort is the preferred route. More importantly, nailing a shoe onto a painful laminitic hoof is not in the best interests of the horse. To make an acutely laminitic horse more comfortable, therapy hoof boots with gel pad inserts will help. Alternatively, duct-taping blue Styrofoam to the bottom of the hoof can work wonders for the
horse’s comfort while one is organizing the dietary changes, trim, and hoof boots. It is best to allow the horse to move about gently as it chooses (limited turn-out), rather than to lock the horse in a
stall. A deep bed (four to six inches) of pea gravel in the turn-out area will also provide comfort to the horse.

Exercise is an excellent way to keep insulin values under control. Using a track system and having hay and water sources spread out to keep horses more active is helpful. However, horses should not be worked until at least 6 months (and 9 months is better) after a laminitic episode, because the laminar connections
will not be healthy until there is at least half a cycle of hoof growth. Exercising before those connections are tight and healed will cause further damage and prolong healing time. Hand-walking in straight lines (and in boots or on soft ground) with no sharp turns is fine once the horse is no longer sore.

Riding and lunging are definitely out until there is adequate new hoof growth.

Again, for comprehensive information about insulin resistance and Cushing’s disorder in horses, you can access the proceedings from the Second NO Laminitis! Conference, held in Oregon in 2013. The proceedings are free to download  here: http://ecirhorse.org/index.php/conference-proceedings-recordings

Thank you for reading!

Coronavirus Statement: NOTE orders to EUROPE can now only be 21kg
Dismiss